Three magical sisters who have the power to capture the love of three vampire pirates.

A Pirate’s Obsession:
Losing his hand to a demon means Ronan Macmillian is desperate. He’ll do anything to avoid being a cripple, even sacrifice to the same demon an innocent, beautiful undine.
Angelica knows Ronan is her mate and is determined to show him he’s a warrior, even if he’s maimed. She must forsake the sea life she’s always known, and stay out of the clutches of a clever demon, to win the pirate she loves.
But when Ronan meets the beautiful Angelica, restoring his hand and handing over the undine becomes complicated. If he fails to obey, the demon promises he’ll make him a monster and not even the crew of the Soaring Phoenix will be safe.
Will Ronan betray his honor and his heart and deliver Angelica over to the demon? Or will true love prevail and win Ronan her life?

A Pirate’s Bane:
Imprisoned. Hated. Desperate. Water Elemental Isabella is a prisoner on board the dreaded Fiery Damsel pirate ship. Her choice is mate with pirate Leif Black or die. A demon wants their unborn child to complete a deadly spell. Leif is her chosen mate, and she must use all of her power to resist him for their sake and their unborn child.
Leif Black has problems of his own. He has kept his sisters hidden from the crew of the Fiery Damsel and never told them that he is a vampire. Love is the last thing on his mind. But the determined demon is one step head of him and curses him. He’s now possessed by a dragon spirit, and he’s unable to control his powers, especially his lust for Isabella. Her sweet song awakens something inside him that he’d long forgotten.
Isabella and Leif fight to deny their forbidden love, but destiny won’t be defied. When the lust proves to be too strong, they must work together to protect their child and trust each other to defeat the evil demon.

A Pirate’s Darkness:
Destined to be queen of the undines, Penelope must master her winter powers and remain pure. But time is running out. A time spider is hunting her. To save her people, she must flee. If caught, the beast will bite her and drag her back to a demon’s island. Then, the demon will feast on her blood, allowing him to the escape the island and kill all those she loves.
Her only hope is to trust Ewan Kelley, the grim gun master of the Soaring Phoenix.
Ewan wants no part of this and is still mourning the loss of his beloved woman and guarding his blind daughter from the demon. But an archangel reveals that the demon knows where she is and plans to kidnap her. To keep her safe, he must save a woman he barely knows. In return, the archangel promises to give sight to his little girl.

Their attraction for each other proves to be too strong, and soon they learn that their forbidden love will not be denied. Only by working together can they defeat the forces of evil.
Buy Links
Amazon: http://amzn.to/2uYOedc
Kobo: https://www.kobo.com/us/en/ebook/princesses-of-the-sea
24 Symbols: https://www.24symbols.com/book/x/x/x?id=2275166
Inktera: http://www.inktera.com/store/title/1c8c6bab-29d6-47a7-a8b9-1ccb0fa7ff7a
Barnes & Noble: https://www.barnesandnoble.com/w/princesses-of-the-sea-ml-guida/1126493913
Scribd: https://www.scribd.com/book/350095852/Princesses-Of-The-Sea-Legends-of-the-Soaring-Phoenix 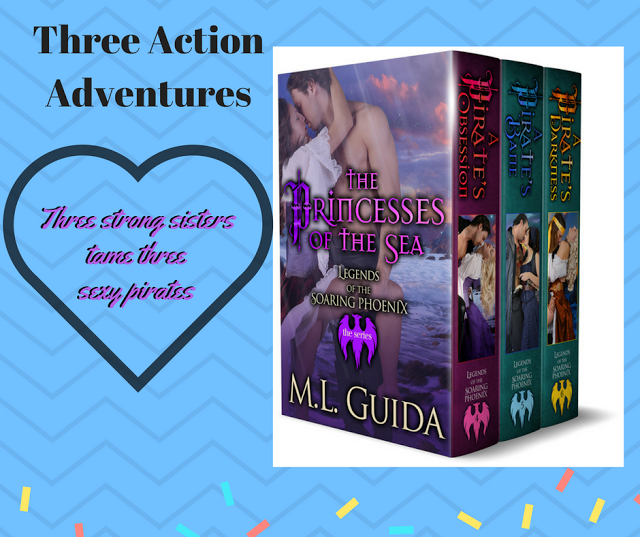 Ronan Macmillan leaned against the bulkhead, detesting the tied bandages on his stubbed wrist. Sometimes he swore he could feel his absent fingers and hand move. Hell, his palm even itched. Doc said it was phantom pains, an illusion—his mind hadn’t accepted that his right hand was gone.
Visions of the horrific island battle with the demon Zuto flashed through his mind. He couldn’t shake them. Zuto slicing off his hand. The grotesque spider. And his promise…oh his promise…
He hated that damnable demon and his blasted curses. Because of him, the crew turned into vampires during every full moon. If they didn’t feed, the thirst nearly drove them mad.
But now the demon had a new trick—one Ronan couldn’t refuse.
All he had to do was to find an undine, a water elemental, then hand her over to Zuto. How bad could it be? It’s not like the undine was human. The demon needed her blood, then he’d promised to restore Ronan’s hand. He could be a warrior again.

The terror was like tangling seaweed, strangling her. After witnessing the shocking horror on Zuto’s land, Isabella thought she could never be truly frightened again, yet there were times her beating heart thundered so violently, she worried it would burst. The slimy, wooden walls of her damp cell shrunk around her, closing in on her, cutting off the thin and sour air. She panted to ease the pressure squeezing her lungs.
And there were smells…
She wrinkled her nose at the stench of human excrement, wondering what the fate had been for those poor souls. Would hers fare any better? Not even the tiniest breeze eased the reek of rotting and dried gore that permeated the chamber, leaving a thin film on her split lips. She rubbed her mouth on her arm and winced, tears of frustration welling in her eyes.
Heavy footsteps creaked down the stairs. Isabella’s stomach tightened.
Quinton Palmer, Captain of the Fiery Damsel, walked into the brig, having to duck under the doorway. He was a brute of a man, but it was his watering left eye that sent fear running through her veins. “Good evenin’, Isabella.” He carried a tray of food that turned her stomach. “I brought you dinner.” His smirking tone spurred her hate.
There was a bowl of slop and a piece of moldy bread—not even fit for a hungry shark.
He sat the tray down, then opened her cell.
Despite her gnawing hunger, she met his hard stare. “I refuse to eat that.” She flicked her hand. “Take it away.”
He rushed over to her and snatched her arm, pulling her close. He was more than a head taller and seventy times stronger. He lifted her off the floor, her feet dangling. His thick red beard flickered over her chin, making her shiver, and his red eyes chilled her blood.

The angry flames grew hotter and higher, casting eerie shadows in the witch’s parlor. A glistening of sweat slipped down the temples of Penelope’s face. She squirmed in a wooden chair, winding her shaking hands into the folds of her dress.
“Morgana, why are we calling upon the demon Natasa?”
Penelope had never met a demon, and the stories of the black-hearted demoness made her want to jump out of the chair and race out of the room. After her mother died, her father had told her that she was the key in protecting her people as long as she remained pure. Before she left to care for Angelica during her pregnancy, he had called her to his private chambers. His words echoed in his head.
“Penelope, your power is growing, and it will be strong enough to protect your people from the humans and the demons that hunt them––as long as you do not taint your soul.”
Unfortunately, meeting with a demon would mean breaking the rule.
Morgana Fey opened an earthen jar with her gnarled hand and released the sweet smell of mint. “I told you, mon chère, because of my dreams. My dreams are never wrong.” Her scratchy voice was strong and sent icy chills down Penelope’s back.

AUTHOR BIO:
M.L. Guida writes dark paranormal romance, delving into worlds of demons, vampires, and angels. She has three series: Legends of the Soaring Phoenix, Angels of Death, and Vampires on Holiday. Her characters battle evil forces and face their worst nightmares before they can become triumphant. She is obsessed with the supernatural ever since she was a little girl and fell in love with the original Dark Shadows series. Now, she loves to watch A Haunting, Supernatural, Ghost Adventures, and Dead Files.
When not writing or watching her favorite spooky series, M.L. Guida loves to walk her cocker spaniel, Sadie, ski or scuba dive.
She is a member of Colorado Romance Writers and a member of Romance Writers of America. You can find more information about M.L. Guida and any new upcoming releases at www.mlguida.com and her blog is http://www.mlguida.com/blog/