A SCOTTISH WEDDING
By Hilaria Alexander

Blurb:
Fans of Lost in Scotland will love revisiting the heather-covered highlands as Sam and Hugh try to make their happily-ever-after a reality in this follow-up novel!
TYING THE KNOT!
Ladies, Hugh MacLeod is off the market! We caught up with the sexy hunk from Abarath and his fiancée, makeup artist Sam Farouk at an event in Edinburgh. The pair met last year while working together on season one. The Scottish actor looked handsome in a tailored dark grey suit, while the raven-haired beauty at his side turned heads in a golden lamé gown which channeled the iconic Marilyn Monroe dress of the same color. Ms. Farouk played coy when asked about the engagement, only revealing that the ring belonged to Hugh’s grandmother. With a dreamy look to her groom-to-be, Ms. Farouk confessed his proposal was “fairytale worthy.” MacLeod charmingly deflected each one of our questions about season two of Abarath, saying he would get in trouble if he told us anything. When we asked if a date had been set yet, the engaged couple looked at each other for a brief second. Soon, they replied in unison in a way that turned us into mush. Ms. Farouk added that it will all depend on Hugh’s schedule and his commitment with the show. We wish the very best to the groom and the bride-to-be and we hope to bring you more news about their upcoming nuptials!

OTHER BOOKS IN SERIES!
Book #1 Lost in Scotland:
http://amzn.to/2tYr8pl 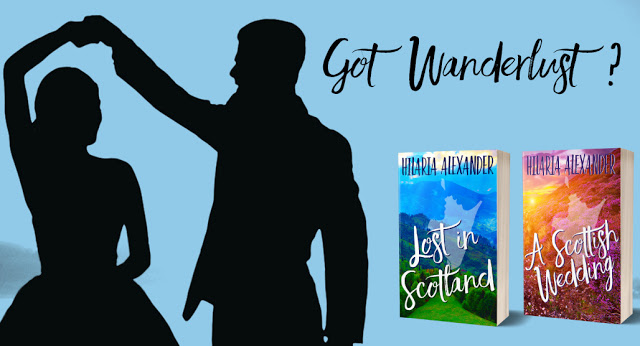 EXCERPT #1
“The World’s End,” she mumbled. “Why does it sound so familiar?”
“Probably because it’s one of Edinburgh’s oldest establishments. You might have heard someone else talk about it.”
“I don’t think so, I don’t recall any conversation…” She trailed off. I glanced her way as her frown turned into sudden realization. “Of course! How could I be so stupid?”
“What?” I asked.
“The World’s End!”
“What about it?”
“It’s where Jamie and Claire go after their reunion in Voyager!” I gave her a look of confusion and she sighed, exasperated. “Hugh, remember Jamie Fraser from Outlander? Best book boyfriend, fictional husband, no-one-can-hold-a-candle-to-him, all-around badass hero?”
I raised my eyebrows in response, only a wee bit offended Sam didn’t care for Abarath quite the same way.
“Don’t give me that. We talked about this—Abarath is no Jamie Fraser. Different ballpark, MacLeod. Claire and Jamie’s love story withstands time and space!” she tried to reason. “Maybe I will change my mind about him if he stops being such a damn flirt!” She wasn’t wrong there; unlike Jamie Fraser, Abarath had no qualms about not being monogamous.
“Fine. You’re right. Can we go now, lass? I’m ready for a pint.”
“Of course. Let’s go,” she said, taking my hand and leading the way. We walked for a few minutes, fingers laced together, and then she stopped in her tracks again.
“Um, Hugh…you should take the lead.”
“Why is that?”
“Because I have no bloody idea where The World’s End is.”
I pursed my lips together, noticing how cute she sounded when she said bloody.
“Dinna fash yourself. I ken my away around here, neach-gaoil.”
“Why is it called The World’s End, anyway?”
“Because, once upon a time, that was where the city of Edinburgh ended. The walls of the city were just a few steps away, the world’s end, ye ken. Everything outside those walls was foreign and dangerous—a bit like you, in a way,” I told her with a smug smile.
“Har har,” she replied, laughing and igniting a warm ache in the middle of my chest.
“You know what, though, Sam?”
“What?”
“I wouldn’t want it any other way.”

EXCERPT #2
“I just want you to know you are perfect to me, just the way you are. How dare Winston say you look fat?”
He gave me a shy smile followed by a nod.
“Well, he said I got soft in the middle.”
“Soft?” I asked in a horrified tone.
“That’s what he said.”
“I don’t like Winston Styles very much anymore. How could he? How could he tell you you’re going soft?”
“It’s not that big of a deal, Sam. I just have to do it. I don’t have much of a choice, after all.”
“No one can tell the difference, Hugh, believe me. I touch you all the time. You are anything but soft.”
“I did gain weight, Sam. Don’t say I didn’t. Look.” He took off his thermal Henley and stared at me with arms open to show me I was wrong. Well, maybe he was just slightly, slightly less taut around his waist, but I would call it slight bloating, not weight gain.
“This is insanity,” I muttered. “And if you’re soft, what does that make me?”
Granted, I wasn’t the one who often had to be shirtless in front of a camera. Still, I instinctively looked down at my belly and tightened the muscles of my abdomen, trying to make my little pouch disappear, and Hugh noticed.
“Don’t. Don’t do that, Sam. You’re beautiful. I love this spot right here,” he said, brushing the skin right below my belly button, “this slight curve here…that leads to the sweetest valley.” His accent was maddeningly sexy when he spoke in a low, gruff voice.
I loved the way he said valley. It drove me insane, just like his touch.
His fingers across my belly sent a shiver traveling across my skin, and a sweet ache bloomed between my thighs.
“And I love this,” he said, tracing the curve of my hip, going up to the hollow of my waist, tracing a finger around the curve of my breast.
I sighed and looked up to him. His eyes were the bluest of blue when he stared at me intently, with arousal, but then something flashed across them, as if he’d forgotten something, and the maddening intensity disappeared.
“Winston just wants to make sure I get back on track and keep up with the regimen I was following. He said it might be difficult with my fiancée spoiling me at home. I’ll have to be strong and resist your culinary talent, lass.”
I shook my head as I kept surveying the area. Soft. What an absurd notion. 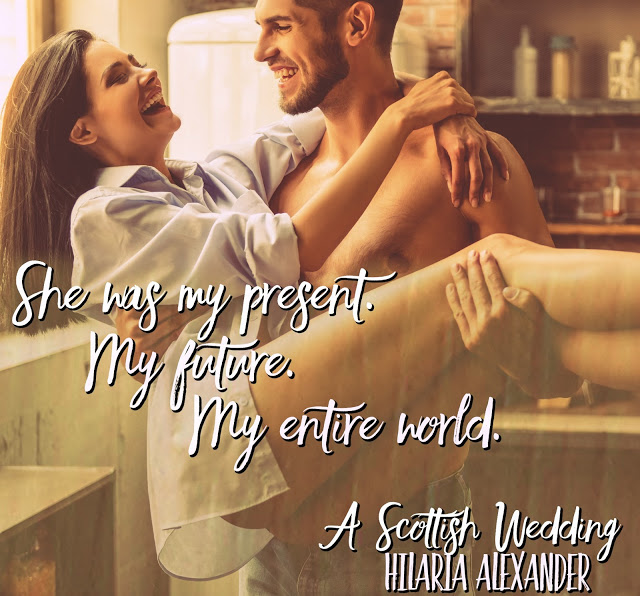 EXCERPT #3
“You’re so bad,” he whispered.
“Shush, you love it,” I replied as I locked the stall door behind us.
“I do.” His accent was deeper whenever he said that, and I couldn’t help but fantasize about the day he was going to say that in response to taking me as his wife.
For the time being, he was taking me elsewhere.
“Bad girl,” he whispered in my ear, his erection pressing against my back. I turned around and he was grinning, his eyes wild with desire. He pinned me against the wall, one of his hands grabbing a fistful of my hair.
His mouth captured mine and his tongue traced the shape of my lips before wrapping around my tongue in a fluid tempo. He broke the kiss too soon and my back arched, my hips looking for more friction. One of his hands slid under my shirt, pulling my bra down, teasing my heavy breast and my hard nipple.
“What if someone finds us here?”
“Unlikely,” I replied in a whisper as his mouth placed slow, deep, searing kisses on my neck.
“Why do you say that?”
“Because…I just sent several trays of food to the tables. No one is coming in here unless their bladder is ready to burst.”
“So clever,” he teased. “But what if they do? What if someone comes in here?”
“Well, in that case…I bet you can be very still…and very quiet, too. Can’t you?”
He hummed, but his eyebrows were pressed together.
“What is it? Don’t tell me you’ve never had bathroom sex before.”
A grin flashed across his face and he shrugged. “What if I haven’t?”

Author Bio:
Hilaria Alexander was born and raised in the south of Italy, where her family still lives. She was bit by the travel bug early on and lived in Tokyo and Orlando for a while before settling down in Oklahoma City with her husband and kids.
She loves books—obviously—as well as movies and TV, and is addicted to award shows. She can’t play an instrument to save her life, but she loves music, which is one of her biggest inspirations when plotting new stories. If you have questions about her or her books, ask her on Facebook and Twitter, or email her at hilaria_alexander@outlook.com. For excerpts, news and giveaways, join her readers group.