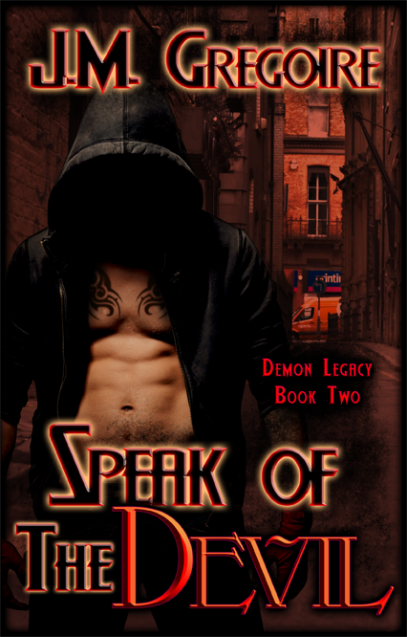 Nearly half a year has passed since Asmodeus opened the gateway allowing an unknown number of demons to spill onto our plane of existence. A fatal standoff has left Dez on her own to hunt the stray demons down and send them back to Hell where they belong. Her life has become a never-ending cycle of violence and bloodshed, further tainted by a deepening depression and a longing for the person she had to leave behind. When Dez receives an unexpected phone call, she makes her way to the northern Arizona desert to see an old friend. Upon arrival, there is a message waiting for her from beyond the grave, and she realizes before she can go any further, she must face the one thing she’s been dreading for months. To make matters worse, the message is meant to help her mission, but it forces Dez into an impossible choice. Only Dez can decide which road to take, but will she be able to handle the consequences of her decision?

OTHER BOOKS IN THE SERIESClick on the cover image to be taken to the book’s Goodreads page!
PUBLISHED:

Bestselling author J.M. Gregoire was born and raised in New Hampshire, USA and despite her abhorrence for any season that dares to drop to a temperature below seventy degrees, she still currently resides there with her two children and her two cats. Always a passionate reader, her love of urban fantasy books eventually morphed into a love of writing them. She is currently working on the Demon Legacy series and has a Demon Legacy spinoff series, the Killer Instinct series, coming soon.
AUTHOR LINKSWebsite | Facebook | Twitter | Goodreads | Amazon

I was so excited to be able to catch up with Dez and Vegas.  It has been a few months and Dez is feeling the loss of Vegas.  It is how it is sometimes.  It’s not like she hasn’t been kicking ass and taking names.  A girl has to do what a girl has to do.  When she gets a call from a blast from the past, she is intrigued and sets off on a new adventure.

Dez is a wild cat and J.M. Gregoire has managed to capture her essence and draw you into her world.  Vegas. *sigh*  The naughty things that I want to do with this man. These two characters are a living breathing entity and they never fail to keep me entertained.

I am not going to tell you where this story is going to go.  I believe that Dez and Vegas have a way of telling their own story.  If you like action, suspense, romance and badasses, then this is a book you need to check out.

Let me know what you think. 🙂

Speak of the Devil and My Little Slice of Heaven in the Middle of Nowhere
By J.M. Gregoire
Most of Speak of the Devil takes place in a little desert town called Meadview, Arizona.  It may seem like an odd location for my story given the fact that I was born and still reside in New Hampshire, on the opposite side of the country, but, there’s a very good reason for my choice of setting. 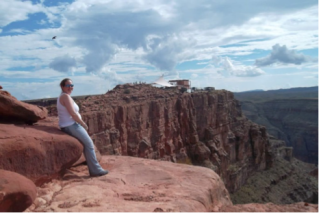 In August 2013, I took a mini-vacation with a good friend of mine.  I had flown out to his place in Las Vegas a few days early, and then we spent three days at a little house I rented in the middle of nowhere.
Meadview is about a two hour drive outside of Las Vegas.  The reason we chose the house as our destination was because we were planning a trip to a side of the Grand Canyon we had never seen before.  At that point, I had been to the Southern Rim three times, and although it is breathtakingly beautiful, I wanted to see a different part of the canyon.  As the Western Rim is parked in the middle of the northern Arizona desert, hotels are not something you often see out that way.  Rather than get a hotel room (the nearest one being a one and a half hour drive from the canyon rim), I looked into vacation rental homes.
In the book, the house Dez arrives at to visit her old friend is the house I stayed at.  With the exception of the Joshua Trees I mention being at the edge of their driveway, that house is exactly the house I stayed at.  However, there were Joshua Trees all over the desert leading out to the house as you have to pass through a Joshua Tree forest on the only road into the town of Meadview. 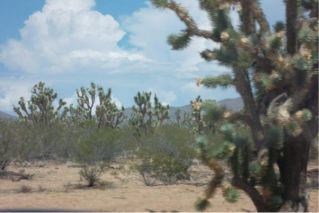 Spending three days in that tiny, lazy town changed my life, and it changed the course of the Demon Legacy series.  I have always been a city girl at heart.  Since I was very young, I have daydreamed of living in a metropolitan area such as Boston or New York City.  The first time I went to Las Vegas, I was instantly smitten with the city, and as a result, I have been back four more times in the last two and a half years.  When we arrived in Meadview that Friday afternoon, I knew I would never view the world in the same way again.
As we stepped up onto the large wrap-around porch, we were both awestruck at the sight before us.  Behind the house, and I mean rightbehind the house, is the Grand Wash Cliffs.

In the book, I mention the rust-red color the cliffs turn at sunset, and this was no exaggeration.  Every night, as the sun makes its descent, the cliffs appear as if someone has set them ablaze.  It’s an absolutely incredible sight. 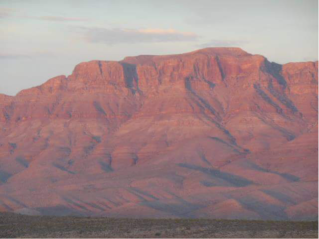 Equally, when the sun greets the world in the morning, it peeks up over the edge of the cliffs, giving the illusion of some mystical force working its magic just out of sight.  The first time I saw this was at six o’clock in the morning while sipping my coffee in the perfect, humidity-free, seventy-five degree air. 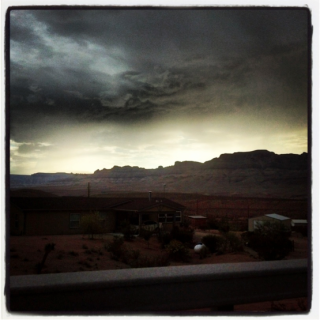 The silence that far out in the desert is deafening.  It feels like being stuck in a vacuum.  The slightest noise made can be heard, even from a mile away.  Even in the middle of the day, the only sounds in this remote town are that of the local wildlife, the most prominent of which was the Gambel’s quail.  Their call sounds like a grown man giggling.  The first time we heard it, Ron and I both were glancing around trying to spot a person laughing.  This, too, made it into Speak of the Devil.
When night fell for the first time, I was dumbfounded.  Now, to understand, you must know that I live sort of in the country.  On a clear night, the view of the stars from my yard is really beautiful.  In Meadview, where the nearest city lights are a two hour drive away, the view is just spectacular.  The sky is a sparkling blanket from one horizon to the other with nothing in between to block your view of the cosmos.
When Ron and I initially made our journey to Meadview, I had told him I was taking the opportunity to empty my mind and get the story line of Speak of the Devil straight.  I knew the direction I wanted the book to go, but I was suffering from a severe case of writer’s block.  On our last full day there, we took the forty-minute drive to the Western Rim of the canyon.  On our way back, out of nowhere, Ron threw out an idea for a turn in the plot.  That one little idea shifted the direction of the story and solved every plot point I was stuck on.  It brought the entire book together and Speak of the Devil was finally on its way to being done.  Without him and that moment of sheer brilliance, Speak of the Devil would have been a much different book.  Hell, I would probably still be stuck right where I was in the story!  I owe him more than he could possibly know, and even dedicated the book to him.
During the course of those three days I spent out in the middle of nowhere, I felt more at peace than I ever had in my entire life.  The desert just does something to me and I feel genuinely good the entire time I am there.  No headaches.  No stress.  No worries.  For the first time in my life, I was home.  Every time I tell someone about my trip to Meadview, I struggle with the ability to clearly explain how this place made me feel.  I hope I was able to convey even a fraction of it in Speak of the Devil.  I hope my story transports the readers to that place, and I hope they fall in love with my little slice of heaven in the middle of nowhere. 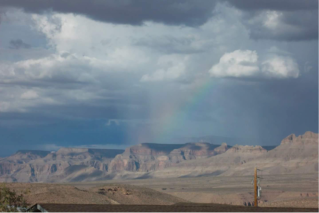