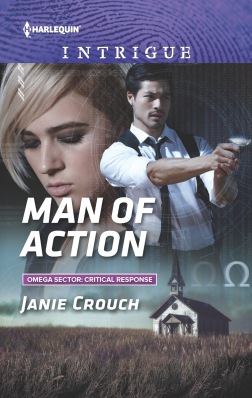 He was a
man of action—especially when it came to protecting his new undercover
partner…
At nineteen, Andrea Gordon’s life
was forever changed. After proving herself instrumental in a bank hostage
crisis, she became one of Omega Sector’s top agents. Four years later, her
skill at reading people is unrivaled—until she meets fellow profiler Brandon
Han. Paired together to track a serial killer who has been targeting at-risk
women, the two become entangled beyond the case. Their mutual attraction
deepens as they get closer to the truth. But when Andrea’s own sordid past
surfaces, they will both be forced to question everything about the assignment…and
each other.
BUY NOW
Amazon | B
& N | Google | iTunes | Kobo

Nominated for the 2014 & 2015 Romantic Times Reviewer’s Choice
Award, and a finalist in multiple other Romance literary awards, Janie
Crouch loves to read – almost exclusively romance – and has been doing
so since middle school. She cut her teeth on Harlequin (Mills & Boon)
Romances when she lived in Wales, UK as a preteen, then moved on to a passion
for romantic suspense as an adult.
Janie recently relocated with her husband and four children to Germany (due to
her husband’s job as support for the U.S. Military), after living in Virginia
for nearly 20 years.  When she’s not listening to the voices in her head
(and even when she is), she enjoys traveling, long-distance running,
movie-watching, knitting and adventure (obstacle) racing.
She teaches online communication classes for an American college part time, and
writes full time. Most of all, she loves to laugh and smile and count her
blessings. And her blessings are many.
Website | Facebook | Twitter | GoodReads