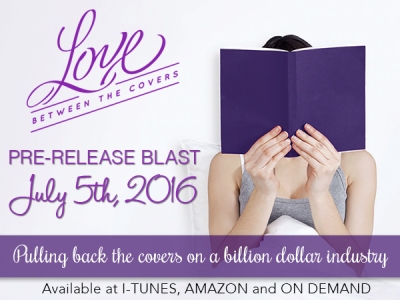 Love Between the Covers
A Documentary Film
Written, Produced & Directed by: Laurie Kahn
Releasing July 12th, 2016
Distributed by: The Orchard

Love stories are universal. Love stories are powerful.  And so are the women who write them.
Love Between the Covers is the fascinating story of the vast, funny, and savvy female community that has built a powerhouse industry sharing love stories.
Romance fiction is sold in 34 languages on six continents, and the genre
grosses more than a billion dollars a year — outselling mystery, sci-fi, and
fantasy combined.  Yet the millions of
voracious women (and sometimes men) who read, write, and love romance novels
have remained oddly invisible. Until now.
For three years, we follow the lives of five very diverse published romance authors
and one unpublished newbie as they build their businesses, find and lose loved
ones, cope with a tsunami of change in publishing, and earn a living doing what
they love—while empowering others to do the same. Romance authors have built a
fandom unlike all others, a global sisterhood where authors know their readers
personally and help them become writers themselves. During the three years
we’ve been shooting Love Between the
Covers, we have witnessed the biggest power shift that has taken place in
the publishing industry over the last 200 years. And it’s the romance authors
who are on the front lines, pioneering new ways to survive and build
communities in this rapidly changing environment.
Pre-Order Now
iTunes Movies | Amazon

Love Between the Covers – Official Trailer from Laurie Kahn on Vimeo. 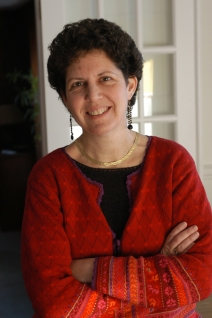 Director/Producer LAURIE KAHN’s films have won major
awards, been shown on PBS primetime, broadcast around the world, and used
widely in university classrooms and community groups. Her first film, A
Midwife’s Tale, was based on the 18th century diary of midwife Martha Ballard
and Laurel Ulrich’s Pulitzer Prize-winning book A Midwife’s Tale. It won film
festival awards and a national Emmy for Outstanding Non-Fiction. Her film TUPPERWARE!
was broadcast in more than 20 countries, won the George Foster Peabody Award
and was nominated for a national Best Nonfiction Director Emmy. Kahn previously
worked on Eyes on the Prize: America’s Civil Rights Years, The American
Experience, FRONTLINE’S Crisis in Central America, All Things Considered, and
Time Out. She’s a resident scholar at Brandeis’s Women’s Studies Research
Center.
For more information on the film, http://www.lovebetweenthecovers.com/
Website | Facebook | Twitter | YouTube

Four years ago, when I began making my documentary film Love Between the Covers, I stepped into a community I knew nothing about: the global network of women who write, read, and love romance novels. What I found surprised me. Here are ten things I learned:

Romance novel sales total more than a billion dollars a year. They sell as much as sci-fi, mystery, and fantasy combined.

More than 70 million people in the USA alone read at least one romance novel per year, and most of them read many more. The work of popular American romance writer Nora Roberts is translated into 33 languages and distributed on 6 continents.

In between, you’ll find paranormal romance with vampires and shapeshifters, time-travel romance, historical romance, contemporary romance, and romantic suspense. There are growing romance subgenres for LGBT love stories, a large community of writers who specialize in African-American romance, and there’s even a popular Amish romance subgenre.

Women of every description (and a small number of men) are the engine of this industry.

Contrary to expectations, romance authors come from every economic class, every racial group, every sexual preference, and every level of education.

When I asked the pioneering African-American romance author Beverly Jenkinsabout her peers, she told me, “Women from all walks of life do this. We’re not sitting in the proverbial trailer park in ratty nightgowns, eating jelly beans and watching soap operas. There are some pretty powerful women doing this! Geneticists, astrophysicists, lawyers, doctors…” The list goes on.

Len Barot (pen name Radclyffe), one of the main characters in Love Between the Covers, began writing lesbian romances during her surgical residency. Mary Bly (pen name Eloisa James), another main character in the film, is a Shakespeare scholar by day and an author of historical romances by night.

I interviewed PhDs, lawyers, and insurance executives. I also interviewed romance authors who worked in factories. There’s an open door for anyone who wants to give it a try. Nora Roberts, the rock star of the romance industry, never went to college.

We’ve all seen depictions of the lonely, lovesick romance writer, who pens titillating novels while eating bonbons and sobbing over her keyboard.

Don’t believe the stereotype. While romance does offer women a place to escape daily life and live out their fantasies, this community of readers and writers are statistically more likely than most to be in happy relationships.

In the romance community friendships that begin online – based on a shared love of books– often become real and enduring friendships.

Beverly Jenkins and her readers are in constant contact at Beverly’s Facebook page, talking about books, football, music, and the ups and downs of their everyday lives. Every other year, Beverly takes a trip with her readers to places where her novels are set.

Radclyffe invites beginning authors to her farm in upstate New York, where she leads workshops on romance writing, and several of Eloisa James’s loyal readers told us they found their closest friends, with whom they communicate every day, through Eloisa’s blog.

At a Romance Writers of America (RWA) national conference, unpublished writers are always welcome (something that does not happen at other writer conferences), and there are dozens of workshops taught by established writers about everything from plot structure and writing knife-fights, to social networking and negotiating contracts. You will see bestselling novelists sitting down for coffee with unpublished newbies, critiquing their work and giving them business advice.

Romance has been at the forefront of the biggest change to take place in publishing in the last 200 years: self publishing. Together, romance authors have figured out how to succeed in self-publishing. Instead of being secretive, these one-person indie publishing houses share their knowhow and numbers (not a common practice in publishing).

I had a blast exploring the romance community over the last four years. In creatingLove Between the Covers, I discovered one of the few places where women are always center stage, where female characters always win, where justice prevails in every book, and where the broad spectrum of desires of women from all backgrounds are not feared, but explored unapologetically.