Freelance thief-for-hire Asa Ward’s latest job is heisting a powerful magic relic from a gangster’s lair. But what should be an easy payday quickly becomes larceny the hard way—when he’s dragged into a three-way crime war where mind-bending, body-racking magic is the most lethal weapon of all. And just when Asa thinks he’s scored, the ruthless kingpin he’s ripping off strikes back…threatening the only life Asa values more than his own.

Backed into a corner by the crime boss Conti, Asa must do the gangster’s bidding or lose what he cherishes most. That means infiltrating a swank, secret auction and stealing the enchanted objet of honor from an even more dangerous underworld big shot. But with a brutal enforcer standing in his way, Asa will need the quickest wits, fastest fists, and meanest magic to even the odds, get the goods, and stay alive. 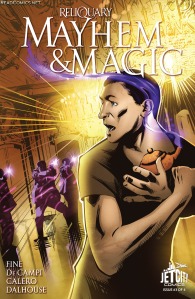 Asa is caught between a rock and several hard places when his mission to snatch a precious artifact from a crime lord’s auction is crashed by a rogue commando raid. Surrounded by weapon-wielding enemies, dubious allies, and magic both sinister and seductive, the only way out is paved with double crosses and triple threats. But Asa would rather take the risks than reap the consequences: life under the thumb of sadistic mobster Zhong Lei.

The magical relics everyone’s after are in Asa’s hands. But keeping them might put his neck in a noose. The Headsmen are determined to confiscate the dangerously powerful artifacts—and their cunning agent Laird has Asa on the ropes. But can all the magic and muscle in Miami stop Asa from salvaging the swag, collecting his bounty, rescuing his beloved…and making good his escape before the bad guys know what hit them?

Sarah Fine was born on the West Coast, raised in the Midwest, and is now firmly entrenched on the East Coast.
When she’s not writing, she’s working as a child psychologist. No, she is not psychoanalyzing you right now.