Harmony Wright is a bad girl living a good girl’s life. From the time she was born, she’s always been the good twin. The ladylike twin. The twin her high society (or at least as high society as you can get in San Angelo, TX) mom likes to parade in front of all her garden club friends. She’s gone along with it, too—wearing pearls and Chanel when ripped jeans and motorcycle boots are more her speed. But when Harmony takes off for an extended visit with her twin sister, Lyric, she leaves her good girl persona in the dust …

Dalton Mane knows what it is to be bad and he’s more than ready for the peace that comes with living the good life. Once the crown prince of a powerful biker gang, Bastards of Hell, he walked away from it all when tragedy struck. Now the general manager of the Fort Worth Wranglers, he spends his time wheeling and dealing in the sports world and all while keeping an entire team of football players in line.
When Harmony crashes into Dalton, his tidy little life is over. Will he give up everything to keep Harmony out of trouble? 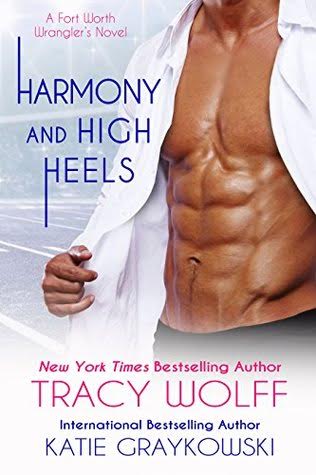 Tracy Wolff lives with four men, teaches writing to local college students and spends as much time as she can manage immersed in worlds of her own creation. Married to the alpha hero of her dreams for twelve years, she is the mother of three young sons who spend most of their time trying to make her as crazy as possible.

You can find Tracy also on Twitter, www.tracywolff.blogspot.com and www.sizzlingpens.blogspot.com.

I write romantic comedy with lots of heart. I like scuba diving, Mexican food, chocolate cream cheese frosting, movies where lots of stuff gets blown up, and sparkly things. I have a husband, a daughter, and three K-9 kids. I’d love to hear from you. Shoot me an email at katiegraykowski@me.com

“I did knock, but you couldn’t hear it.” Dalton pointed to her smartphone. “Always listen to your music so loud? At that decibel level, you’re looking at another two years before the hearing loss kicks in.”

“Thanks, Dr. Oz, I’ll keep that in mind.” Harmony pulled the first batch of cookies out of the oven.

“Are those oatmeal raisin cookies?” He sounded hopeful, but she wasn’t in the mood for company. Especially not company she was tempted to spread whipped cream all over before slowly licking it off.

And damn it, it didn’t help her little problem that he had the same damn sense of humor that she did. The bastard. Not that she had any intention of showing him how much he turned her on. She might be reckless, but she didn’t do suicide missions, and the tiny voice at the back of her mind, which she usually ignored, told her that tangling with Dalton was going to fuck her up way more than she already was.

She was determined not to ignore it today, especially after last night’s close call.

“So, not only do you break and enter, but now you’re stealing food?” Too bad she’d left her guns by the pool. She could nip this thing—whatever it was—in the bud. “You Fort Worthers are weird. In San Angelo we have better manners.”

His eyes roamed down her body. “Do y’all bake in bikinis? I’ve never been to San Angelo, but I just might move there so I can watch the bikini baking team.”

“Pervert.” As she turned back to the frying donut, she mashed her lips together to hide her smile. Apparently he liked the way she looked in her bikini—maybe as much as she liked him in that suit.

A quick test told her the donut was ready. Using a metal spider, she fished it out and covered it with a lemon glaze.

“Is that what I think it is?” Dalton’s dark-green eyes turned huge.

“Depends on what you think it is.” She arranged the donut on a plate so that the middle finger was the focal point, then aimed it straight at him. “If you think it’s a donut flipping you off, you’d be correct.”

“Can I have it?” He stepped into her personal space. He was so close she could smell him—sandalwood and something underneath it that was all male.

“No, this one’s mine.” She didn’t back away or back down. Instead, she sucked in the middle finger and bit it off at the root. The smoldering look he gave her conjured images of her mouth swallowing something else entirely. So much for the voice in the back of her head.

Of course, she nearly choked on the mouthful of dough, but the look on his face made it almost worth it.

“Fine.” He shrugged out of his suit jacket, folded it, and hung it on a kitchen chair back. “I’ll make my own.”

Clearly, he wasn’t one to throw his clothes down. It appeared that he liked order. Which made her wonder, if she ripped his clothes off, would he put the groping on hold long enough to pick them all up and fold them?

Not that she was going to find out, but it was a question to ponder. Especially as he rolled his sleeves up and picked up a dough hand. “You want to give me a hand with this?”

His attempt at a joke was lame at best.

She figured the only way to counter was to go lame right back. She handed him another hand. “There you go.”

“Very funny.” He held the dough hand gingerly by the thumb. “Do I just toss it in or what?”

“You need a little more finesse than that.” She couldn’t help herself. She took the dough and with a practiced hand molded it until the fingers met the thumb in the age-old gesture for jerking someone off. Then she dropped it in the oil. “Wait until it turns golden brown and then take it out.”

She flipped her sunglasses down from the top of her head onto her eyes. “Now if you’ll excuse me. The latest Cosmo is waiting for me by the pool.”

“Wait, shouldn’t you stay here and make sure I don’t burn down the house?” He grabbed the spider and tucked his tie over his shoulder.

“Nope, not my house.” She turned and headed back out to the pool.

He whistled his approval of her backside. “Nice.”

“Not too bad yourself.” She didn’t look back.

It was time to enjoy her one and only vacation this year. When Dalton left, she’d go back in and finish up the donuts. All that caged sex appeal was too much to handle in the confines of her sister’s kitchen.

After setting her plate on the table between two of the six chaises, she folded her chaise flat, laid down on her belly, and propped herself up on her elbows. Then she grabbed her plate and her Cosmo.

“This is really good.” Dalton sat on the chair next to her. “Is that lemon zest in the frosting?”

“It’s a glaze and yes there’s lemon zest.” She flipped through ad after ad.

“You should go on that donut competition baking show,” he said between bites.

“No way. They give the bakers weird ingredients. No one but a paid judge wants to eat a donut made out of ketchup and lemon pepper.” She could go for a chocolate glaze right now. When Dalton finally left, she’d whip up some and dip the donuts in it.

“Mind if I have another one?”

Out of the corner of her eye, she saw him lick his fingers.

“Don’t you have a job?” She continued to flip pages. “It’s the preseason. Don’t you need to go micromanage something?”

“It seems to me that reason figures a lot into your personal life.” She continued flipping.

“What’s that supposed to mean?” He reached over and used the towel she was lying on to dry his hands.

“I don’t think this is going to come as a shock to you, but you’re dull.” She flipped the page to find “Kuma Sutra—The Good, the Bad, and the Ugly.”

“I’m not dull.” His tone suggested that he didn’t believe it either.

“If you say so.” She scanned the article and was a little disappointed—but not surprised—that there was nothing new.

“I happen to live a very full and fulfilling life.” Now he sounded like he was trying to justify his life choices to her. Or, more likely, to himself.

“Of course you do.” She flipped more pages.

He stood. “I’m going to make myself another donut.”

“Good luck with that.” She didn’t bother to look up.

He stood there waiting for something—probably for her to get up and help him. “Don’t you want to make sure I don’t burn myself?”

“Nope, I’m good.” She handed him her empty plate. “Can you put that in the sink for me?”

He glanced down at the plate, and she could tell he was trying to decide how to play this. It was almost cute, the way he thought he had a shot of one-upping her. But she’d been trained by Livinia Angleton Wright on how to put—and keep—men in their place. He was going to have to work a lot harder than this to shake her up.

Eventually, he took the plate, but he didn’t head back inside. “Do your tatts have meaning or are they just random things you picked out?” He moved closer, until he was standing over her blocking her sun.

Geez. This guy was harder to get rid of than chlamydia.

These authors were new to me and I rather enjoyed their writing. This story is the second and follows the antics of Harmony and Dalton.  I haven’t read Lyric’s book which comes before Harmony’s and I do feel like it would have been a great read as well.

I love romantic comedies and I am not disappointed.  Harmony is a good girl that wants to be bad.  What could possibly go wrong?  I laughed and snorted till I couldn’t see straight.  You have to check out Harmony and Dalton and let me know what you think!