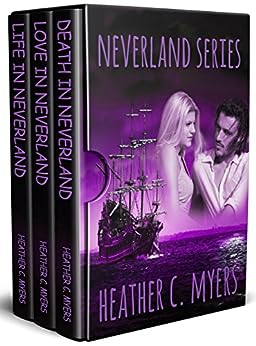 With over 200,000 words and three full-length novels combined in this captivatingly dark box set, The Neverland Trilogy is a unique twist on a classic fairytale…

Death in Neverland: Book 1 In the Neverland, people don’t grow up. Because they’re dead.
Remy Cutler dies, and somehow escapes certain death. She returns to the land of the living with nothing but a ripped gown and a fear of heights.
Two years later, she plans to escape her arranged marriage by stowing away onto a ship in hopes to leave her home with no one knowing. However, she is found out, and the sailors aren’t happy. Before any damage can be done, she is yanked from her predicament back to The Neverland, a place where death resides – the very place she escaped from years ago. Souls are ferried by her savior. To her, he’s known as Nick, but to The Neverland, he’s the slippery Nicholas Grey.
The more time Remy spends with Nick and his crew, however, the more she realizes he’s shockingly misunderstood. Pirates aren’t all bad the way gentlemen aren’t all good. One such gentleman goes by the name of Peter, and he has nothing but power on his mind and revenge against Grey in his heart. And then there are those that are completely indiscernible, like James Hook, a Viking and ruler of The Other World, whose sole ambition is attaining more souls to rule over, no matter what the cost.
Love in Neverland: Book 2 Love in Neverland is as hard to capture as fairy dust.
Luckily, Magdalena Trainor has no need for either. Love has never been at the forefront of her mind. Her sole focus is to keep an eye on Captain Nicholas Grey while James Hook – the only person Magda trusts – has Remy Cutler in his clutches. She doesn’t expect the task to be difficult – Nicholas Grey may have brawn but doesn’t appear to have any brain – except he turns out to be more than she bargained for. And not in a bad way.
For Remy Cutler, love in Neverland is impossible and uimportant. All she wants to do is get back home, back to her parents, her easy life, and even her undesirable arranged marriage with a man she has no passion for. James Hook may be beautiful, but he’s cold, and while he does not raise a hand to her, Remy is constantly left alone, isolated from everyone save for her handmaiden. Rey still has no idea why she’s so special, and James isn’t sharing what he’s planning to do with her either. There’s a threat looming over her head, and James Hook plays two parts: captor and protector. With no one left to trust but him, she puts her life – and heart – in his hand – and hook.
Life in Neverland: Book 3 Life in Neverland does not exist. It is a cage no one can break free from.
Remy Cutler learns this the hard way. As captive of The Magistrate, Remy must find a way to save herself and prevent The Magistrate from getting what she truly wants: control over all three realms in The Neverland. If The Magistrate succeeds, Remy will have no chance of ever returning home. Instead, she will be condemned to a mundane task for the rest of eternity – ferrying souls to her captor. She will never see her loved ones again. She will never get the opportunity to decide for herself if The Neverland is her home. She will never get to tell James Hook that if life in Neverland is a cage, she wouldn’t want to be trapped with anyone else.

When The Magistrate offers Remy the chance to interrogate Peter Pan for information that could help James in exchange for Remy’s freewill, Remy must decide for herself if providing information to James is worth her freedom.

Full disclosure: I am an acquired taste. I’m a typical blonde Orange County suburbanite who says ‘like’ more than necessary, laughs loud and probably obnoxiously, and loves to dance in the rain. I’m a 26 year old college graduate with more than a few tricks up my sleeve, and I also happen to be a pretty big Ducks fan. Oh, and I’m a writer. Like, for real.

I don’t speak in third person (normally) nor do I wear glasses (except when I’m feeling particularly mischievous). I’m lucky to have found my soul mate at the ripe old age of 22, even though he frustrates me on purpose to get a reaction out of me. We live near Disneyland, have two rambunctious female puppies, and have a beautiful baby girl. He has two amazing boys, and has gotten me hooked on Smallville, watching soccer (okay, okay FOOTBALL – FC Barcelona, baby!), and Cancun Juice.