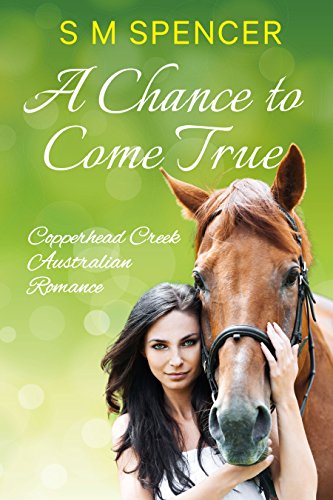 Caity Jones wasted a lot of years waiting for the “two kids, a dog and a white picket fence” dream to come true, but she’s ready to move on now. Letting go of society’s idea of the perfect life, she’s purchased a five-acre property in the small rural town of Willows. She’s determined to live a solitary life and become a writer. And that means staying away from men altogether.

Tom Murray owns and runs the local feed store in Willows. His marriage was a failure but his family is strong, and he can’t imagine a world that didn’t include his three young children. He’s an uncomplicated man, living an uncomplicated life–and he has every intention of keeping it that way.

Both are mature … both have baggage … and both have agendas that don’t include romance.

And then they meet.

At the age of five S M Spencer’s life changed when she was plonked onto a black & white pony for a photograph. From that day on all she wanted was a horse. She spent the next eleven years writing stories about the horses she pretended to ride through the rolling hills of coastal California until she got a job and bought her first horse at the age of sixteen.

In the 1980’s her life changed again when her employer offered her a role Australia. This was the beginning of an adventure of which she has never tired.

Still living in Australia she now writes from the semi-rural home she shares with her husband, horses, cats and dogs–not to mention the kangaroos that share the paddocks with the horses from time to time.

Her current series is the Copperhead Creek Australian Romance series. This is clean Australian contemporary/rural romance set within the Golden Triangle outside Melbourne.

She has also written a clean YA paranormal romance trilogy, Absent Shadows, which is set mostly in Australia.

OTHER BOOKS FROM THE AUTHOR: