Skip to content
March 9, 2017January 8, 2019 romancebookworm
FIRE BURN
by Wendy Knight
New Release 3/9
“I’ve always been able to see the auras. But I knew you couldn’t because you refuse to see the darkness in people and I didn’t want you to ever change. So I didn’t tell you.”

Fate thought the prophecy was over. She graduated high school, made big plans with her family and her boyfriend to travel the world, and got a full-ride scholarship for college in the fall.
Despite blowing up the chemistry lab twice.
But all that changes when the witches show up, because the war they thought they won is just beginning and without Fate and Destiny leading the way, it’s a war they will all lose. Unfortunately, the coven wants them to lead separate teams. Like they somehow don’t realize Fate works better with her sister by her side.
Oh, and Damien.
Damien isn’t going to let the girl he loves face these odds alone. In fact, he’ll risk everything, even her, to help win this battle and keep her alive. Damien makes an impossible choice, one that will change them all. 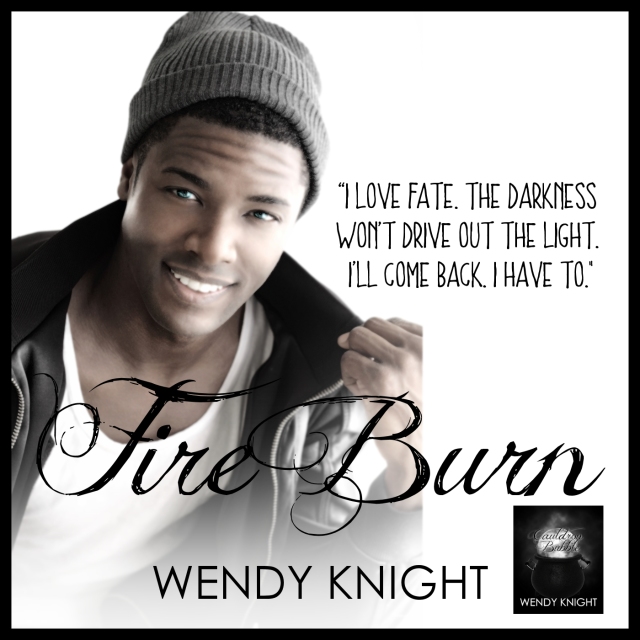 Snippet #1
Damien grinned down at Fate, holding her hands, and even after all their time together, his heart still raced in his chest and his blood roared in his ears. Crazy that she could affect him like that. She swayed toward him, rose on her tiptoes, and her lips danced across his. His hands slid up to cup the back of her head, and he deepened their kiss, hoping if he kissed her hard enough or long enough, she would forget about leaving. 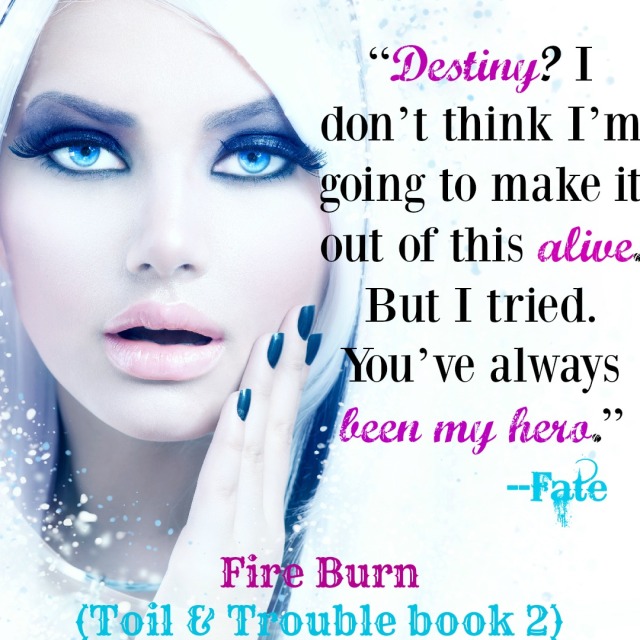 Snippet #2
Fate didn’t know if he would kill her or if she could make him her Damien again. But she had to try.
“Of course you do.”
Fate blinked, turning her head slowly to the other side. It took so, so much energy.
Destiny sat next to her, not rocking and keening like Ancient, but awake and sad, legs tucked underneath her. Fate hadn’t realized the pillow she’d been using rested on Destiny’s lap. Her sister had never left her.
“How did you come after us? I thought the bars—”
Destiny raised her chin. “I make my own path.”
Fate almost smiled. If it didn’t take so much energy. “You’re a tough cookie.”
Destiny brushed Fate’s hair off her temple. “Only when you need me. All the other times I was just stuck. Nearly got us killed a few times. Actually, we were in the area. Just couldn’t break the bars to come help.”
“Until I decided to fall off a cliff?”
Destiny nodded.
“That was nice of you.”

Snippet#3
To go near him would be suicide. The giant warlock would see her and she couldn’t move fast enough to avoid those attacks.
But her broom could.
She grabbed it, wished it was her real broom and not a loaner, and swung astride.
“I can’t, Fate! I’m not fast enough!” Destiny cried.
Fate nodded. “I know. But I am.” Those words seemed to change everything. Fate felt it, but couldn’t understand it. “Get ready,” she told Destiny. She slid into the air, swinging wide and hoping to get behind him before he saw her. Destiny, ever the crazy one, decided to distract the monster.
Because that was safe.
Alina, of course, joined Destiny.
Fate couldn’t hesitate to scream at them. She refrained from calling Destiny stupid in her head and just flew, as fast and as low as she could. It was dangerous to move that quickly; one false breath and she’d crash into the non-padded rock and die. But she couldn’t exactly take her time. Destiny and her mother could only cast spells at the warlock from out of range for so long while it lumbered closer. 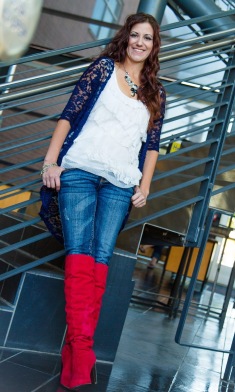 Wendy Knight is the award-winning, bestselling author of the young adult series Fate on Fire and Riders of Paradesos. She was born and raised in Utah by a wonderful family who spoiled her rotten because she was the baby. Now she spends her time driving her husband crazy with her many eccentricities (no water after five, terror when faced with a live phone call, no touching the knives…you get the idea). She also enjoys chasing her three adorable kids, playing tennis, watching football, reading, and hiking. Camping is also big—her family is slowly working toward a goal of seeing all the National Parks in the U.S.
You can usually find her with at least one Pepsi nearby, wearing ridiculously high heels for whatever the occasion. And if everything works out just right, she will also be writing.

Sign up for my newsletter and get a free ebook! https://goo.gl/5EVAKb