WHAT THE HEART SEEKS

Dylan McBride never knew pain until he lost Heaven. As if her betrayal didn’t break his heart, his involvement in her death sends him spiraling into a web of darkness. Though his new abilities make him a threat to his father, they are also unpredictable. Killing his dad will be simple. Killing Layne won’t.

Layne Perry’s soul is shattered, along with his heart. After discovering the truth about the Affinity, he was ready to claim what was his—Heaven’s heart and soul. Witnessing her death destroyed him. It’s his duty to her daughter that keeps him alive, as does the promise he made to Heaven. He’ll risk his life to protect his Seeker’s child—from The Fallen, darkness, and even her father.

When Adalyn shows Layne a future he knows is impossible, he resumes his search for Heaven. Yet, chaos prevails. A traumatizing secret is revealed, complicating Layne’s life more than ever. He must form an alliance with other Psi and make amends with Dylan, the one person that hates him. The battle between them is far from over, bringing Layne to one conclusion. Those who fight hardest have nothing left to lose.

What the Heart Seeks is a paranormal romance full of suspense, soulmates, and supernatural twists. If you like vibrant worlds, mystical characters, and heart-pounding romance, you’ll enjoy this epic tale of love, light, and darkness.

A surge of heat shot through Dylan. Arcs of light sizzled between his fingers. He was ready to cast it on his father again. It was time to finish this.

Once his father relinquished his assault, Layne snuffed out the flame. The two of them paced the crater, glaring at the other. “This won’t end well for you, boy. You’ve exhausted a lot of energy in the last day. Or maybe this is intentional. Are you ready to meet your Seeker so soon? Is death that desirable?”

Layne’s steps stalled. His body went rigid, his hands clenched into fists. “If I die, so be it. I won’t be doing it alone, Nate. I promise you this much. You’ll combust into charred dust before I take my last breath.”

Layne gripped the door frame and stared at his Seeker’s father as he stood on the steps. He arched a brow in Layne’s direction, waiting for him to finish. “You said that Adalyn showed me the future, mine and Heaven’s future. What about Dylan?”

Nicholas glanced at his granddaughter once more then looked away. The grim thrum of his emotions hinted to his uncertainty, as much as it did his fear. “I don’t know, Layne. Adalyn didn’t show us her father’s future.”

Though Layne didn’t like it, Dylan’s life tied to theirs. Still, there was no sign of him in the scenes Adalyn revealed. Regardless of what happened between him and Heaven, he wouldn’t abandon his child.

The question would remain unanswered for now. They still had to find Heaven. Depending on her condition, she would need time to recuperate. Who knew how long it would take before they discussed everything else. But if the future Adalyn showed him held happiness for him and Heaven, it left Dylan with three options.

“Is your daughter a Keeper?” A surge of energy tingled his skin when Captain Laveaux nodded. “Is she my Keeper?”

“Yes, Dylan, which is why I’m going to be on you like flies on shit. I know what your bond entails. Don’t hurt my little girl.”

“Trust me, I don’t want anything to do with this. The only person I’ve ever loved broke my heart. There isn’t room for anyone else.”

“Precisely.” Captain Laveaux studied him with a narrow gaze. Then he turned to the window again. “Which is why I said what I did.”

Most days you’ll find Kelli McCracken knee deep in chocolate bars, coffee, and kooky characters. She is a connoisseur of chocolate, professional percolator, and a master in the art of procrastination.

“Writing a novel is like running a three-ring circus. It’s chaotic, characters don’t do what’s expected, and they leave you with a trail of sh*t to clean. I’m the ringmaster of insanity. Welcome to the show.”

When she isn’t chasing kids, working on crafts, or sneaking a Kit Kat (or two), Kelli spends her time writing.  Of course, it can’t be all work and no play. Once procrastination strikes,  you can find her hanging out on Facebook, Pinterest, or Spotify. Be sure to stop by and say hi. She loves chatting with readers.

5 Random Facts About the Author

She loves singing (even if it’s off key)

If she could meet anyone dead or alive, she would choose Steve Jobs 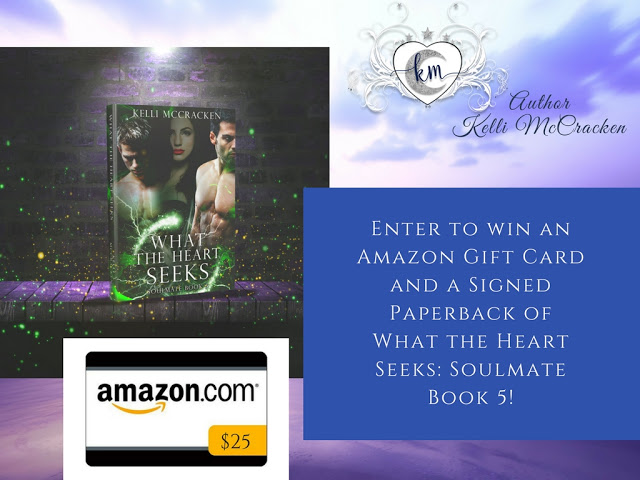