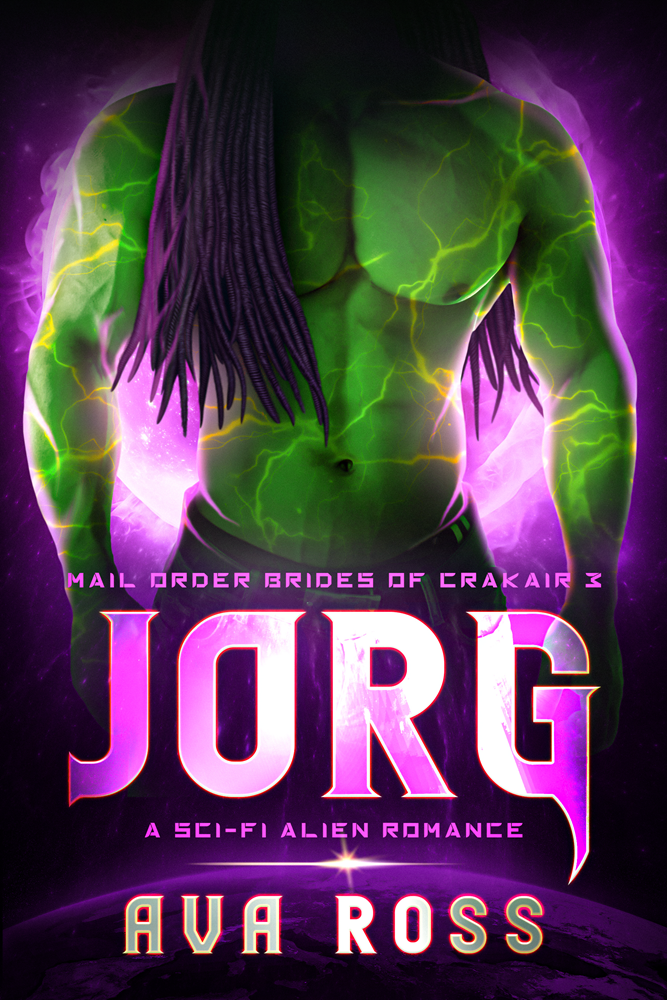 It isn’t every day an Earth woman is chosen to be a mail-order bride for a hulking green mercenary from an extraterrestrial race.

A mail-order bride, Lily’s an everyday Earth woman who plans to meet and hopefully fall for her computer-matched alien groom. She doesn’t plan on being kidnapped and thrown inside a cage on one of the moons orbiting Crakair.

A mercenary, Jorj’s a seven feet tall, scaled, green mass of alien brawn with appendages on his head that can be used in many unusual ways. When he watches the video introducing him to Lily, his matebond lights up on his palm. He’ll do whatever it takes to make Lily his.

Then Lily’s ship is stormed by an alien force en route to Crakair, and Lily’s taken hostage.

With his blood rage igniting, Jorj will have to go rogue to rescue his Earthling bride.

Jorg is book 3 in the Mail-Order Brides of Crakair Series.This standalone, full-length story has plenty of on-the-page heat,hot aliens who look and act alien, a guaranteed happily ever after, no cheating,and no cliffhanger. Look for book 1, Vork, and book 2, Bryk, on Amazon.

KEEP READING TO SEE AN EXCERPT & GET A FREE EBOOK!

Distant shouts from farther down the star cruiser’s hall made Lily pause, and stomps sent her spinning to face that direction.

A Crakairian male raced toward her, peering around as if looking for exits. Dressed in black jeans and a faded black tee, he didn’t fit in with the ship’s android crew, let alone the sole Crakairian male on board, the captain who dressed in a gray spacefleet uniform even if he was off duty.

She moved to the side to let him pass, but he stalled when he reached her. Grasping her forearms, he held tight, though she got the idea if she pulled away, he’d release her.

He shook his head, and his naanans flared before settling around his shoulders. Totally cool. She’d tried to imagine what naanans would look like in real life, but her dreams fell short of the real thing.

His breathing ragged, he dropped his face down close enough to hers she could count the scales on his face. As he studied her with a look heavy enough that she could feel it, she wondered who he was, because he looked vaguely familiar.

“Do I know you?” she asked, tilting her head.

He smelled good, a ridiculous thing to be thinking of at a time like this. Who was he, and why was he running through—

Mechanical shouts rang out farther down the hall, and the alien’s fingers tightened on her arms.

He scowled in that direction. “I must—”

“Halt,” a droid yelled. “Do not proceed farther!”

The Crakairian snarled. “They are too close. I had thought…”

“Hold on. Are you…” Her eyes widened, and she reeled away from him, banging into the wall. “Did you board the ship illegally?”

He nodded and fed her a devilish flash of his fangs. From what she’d read, when a Crakairian male bared his fangs, it meant he was smiling. And damn, it sunk into her, loosening her bones like a shot of whiskey on a chilly winter’s day.

“You’re a…you’re some sort of space pirate, aren’t you?” Her voice came out eager, which didn’t make sense. Why wasn’t she screaming and struggling to get away? What if he’d boarded the ship to kidnap women? Or seduce them.

Her pulse leaped in her throat. For a girl who’d recently ended an abusive relationship, she was awfully willing to jump off the cliff and into this Crakairian male’s muscular arms.

Hold on. While she hadn’t met Jorg yet, she was practically engaged. But a thrill ran through her at the adventure playing out in front of her. For too long, her life had been filled with fear.

It had also been boring.

But rules were rules, and she always—mostly—obeyed them. She stiffened her spine. Despite the excitement, this wasn’t a movie. Even with his too-cute smile and his thick tan dreadlocks—naanans—stroking her shoulders, he wasn’t a sexy hero who’d flirt his way into her bed. For all she knew, this seven-foot-tall, scaly green dude planned to steal the ship and kill everyone on board.

Why weren’t chills zipping down her spine?

As a platoon of droids rounded the corner down the hall, their mechanical arms waving in the air, the alien snatched up her hand and ran, dragging her along with him.

She should be putting on the brakes or yanking away from him, but instead, she kept pace with him, a big grin on her face.

“Where are we going?” she asked, then chided herself. She should be resisting.

“Good idea.” At the intersection, she went left when he turned right. When his grip didn’t loosen, their arms snapped out straight. He frowned at her, but she nudged her head to the left. “This way.”

He studied her for a long while before heading in that direction.

Leading him, she ran down the hall, turned right, and then stopped at a door. A turn of the knob, and she rushed inside with him right behind.

“In here,” she said with adrenaline charging through her like lightning bolts. She took him past the rows of panels and big bundles of coiled wires, all the way to the back of the room. Her daily walks had paid off, because she knew this ship better than her old neighborhood on Earth. “There’s a closet in the back. We can hide there.”

Tugging open the door, she tumbled inside, tripping over a bucket of cleaning implements and almost impaling herself on a hook hanging on the far wall.

He caught her, his arms going around her waist. Nice. Warm and comforting.

But…alien space pirate. Would he make her walk the plank, and why did she hope he would?

Releasing her, he shut the door and wedged the knob in place with the handle of something that vaguely resembled a broom except it had orange, knobby balls buried among the bristles.

She slumped against the wall and shoved her hair off her face. “Well.”

“Well,” he echoed. His fangs flashed again, and the heat that fang-flash sent pouring through her limbs made her realize how tiny the room was. How close he stood to her. And how yummy he smelled.

“Do you plan to ravish me?” she blurted out, interrupting him. Her face flamed, and she slapped her hand over her mouth. Heat rushed through her. Maybe she could talk him into ravishing her. A wild idea on her part, but this alien excited her like her ex never had. “I shouldn’t have said that.”

“Would you like me to ravish you?” His voice had dropped three octaves. One step toward her made their bodies brush together. He planted his hands on the wall on either side of her head and leaned down as if to sniff her hair. 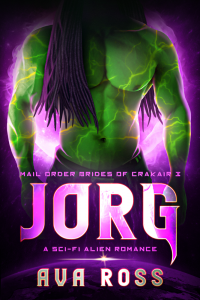 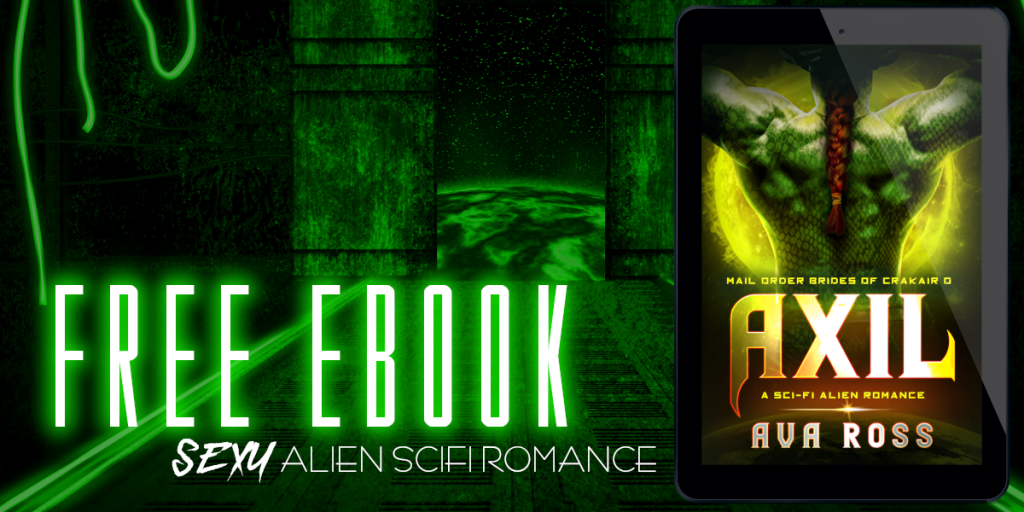 Sign up for Ava Ross’s newsletter and receive a FREE copy of AXIL, a novella-length story in the series to give you a taste of her steamy alien world. Download your FREE copy today!

AVA ROSS fell for men with unusual features when she first watched Star Wars, where alien creatures have gone mainstream. She lives in New England with her husband (who is sadly not an alien, though he is still cute in his own way), her kids, and assorted pets, including a yorkie pup and three cats. 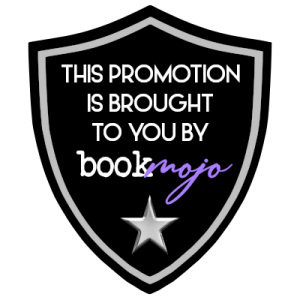