ELLA GREEN IS LOOKING FORWARD TO SOME TIME OFF FROM HER STRESSFUL JOB.

Soaking up the sun with her toes in the sand is a hell of a lot less dangerous than chasing down bad guys and dodging bullets on the regular. But when a wealthy resident of the small town she’s ended up in approaches her with a unique problem he’d like her to handle, saying no isn’t as easy as Ella thought it would be.

Will her standard alias and quick wit get the job done and still leave her time to relax?

Or will she have to work a little harder to earn the money this time?

The Summers in Seaside Collection – Releasing in the Summer of 2022!

Welcome to Summers in Seaside, a small town located along the Oregon Coast and home of the Seaside Festival. This brand new series of short contemporary romance stories will be filled with sun, sand and summer adventures that will tug at your heart strings.

This series will give you a taste of eighteen new stories in a shared world. Each book will be a stand alone story that will include crossovers connecting some of their characters and settings.

KEEP READING TO SEE AN EXCERPT,
ENTER THE GIVEAWAY.
AND LISTEN TO THE BOOK SOUNDTRACK!

VACATIONS ARE FOR SUCKERS

I let out a long, satisfying hum as I lie under the West Coast sunshine, on a beach that sits against a small town I’ve never heard of until recently, after randomly plucking it from Google Maps.

As I listen to the music playing, to the waves crash, as sand settles between my toes, while I lie here, in the cutest little blue bikini you’ve ever seen—all the stress that’s been building for many months melts away like cotton candy when it hits your tongue.

I am extremely happy to report I no longer want to punch the next person to ask me how my day is.  I don’t want to key the next car whose owner decides to take up two spaces or shoot a perp in the foot for asking me what they did when they clearly know what the hell they’ve done, or they wouldn’t be running in the first place.

I breathe a sharp intake of air when I realize I’m letting my thoughts go down a very dark road. I let it out as I close my eyes.

And then I smile, reminding myself, I’m on vacation.

“Best decision ever,” I tell myself with a stretch across the tacky souvenir type towel I bought this morning at some tourist shop on my way to the sand. It’s not my style, at all. Hot pink, white polka dots, fringe on the edges, five times bigger than what I need for only me, but I don’t care.

My body warms to seventy-five degree sunlight, my feet bounce to the tune of Max Frost’s Good Morning.

I am in a bliss-filled bubble I never want to pop.

I’ve never thought of myself as the beach type, to be honest. Or a B&B kind of girl. Yet, here I am, with both things in my life and I am one-hundred percent a-okay with it.

I’ve never thought of myself as anything except really fucking good at my job, which has never left me any time to worry about vacations or R&R in general, but right here, right now, on this crowded beach in Seaside, Oregon, I’m making a vow to make it happen a lot more often.

I’m having such a good time doing nothing, I almost don’t realize my phone is ringing. It’s the vibration against my leg that startles me out of the moment.

Absent-mindedly, I reach for my cell like it’s a limb, which, in an abstract kind of way, it is, most days. And I immediately regret answering it.

“Uh. Hey, Elle.” The familiar voice on the other side of the line stutters a little. “Sorry to bug you, but we have an issue over here.”

When he says, “over here,” he means East Coast. Which is approximately twenty-eight-hundred miles from where I sit. Lay. But that’s beside the point. He doesn’t need to know my whereabouts.

“Not interested, Mick.” I don’t bother to open a single eye for the guy. “I told you, I’m MIA for the next fifty days.”

“Technically, that was a week and a half ago, so really, it’s more like forty.”

“Even more reason not to call me and waste this very precious me time.”

“I know. I get it. Really. But I’m thinking maybe it wasn’t the best time to—”

“Hold up.” I push up off the pink polka-dotted with fringe on the edges, souvenir towel, and lean back onto my elbow as I huff into the phone. “Was it or was it not you who told me I needed to take a break?”

“And do you or do you not control my workload?” Mostly.

“I don’t care if the Queen of England wants to pay me a million dollars to go hunt down her grandson and drag him back to Buckingham Palace so she can lecture him about the rights and wrongs of badmouthing the Royal. Motherfucking. Family, Mick. I’m off duty until further notice.”

I ignore the muffled chuckle from somewhere behind me and grind my teeth. Because I do care, to be honest. A million dollars would set me up for a long time.

Regardless, I end the call and toss my phone to the other end of the mile long towel. Then, I covertly retrieve it because, you know, my music is in there.

“Fuck.” I say it a little louder than I probably should in a family friendly atmosphere, but dammit. Two minutes ago I was zen. Now I’m stressed. And there’s sand all over my phone.

I try taking a deep breath one more time. I gaze out at the ocean, try to get back to where I was when Max Frost was wooing me.

Then some dude decides it’s his personal business to tread his big fucking feet right into my personal space.

“Excuse me,” he says in a very low, very sultry voice that has no business whatsoever being that sexy while I am this agitated.

I peek up and am even more perturbed that his perfect face perfectly matches the sound of his perfect voice.

Scruffy jaw, a jet-black mess of hair on the top of his head that says he clearly just came from the ocean. Deep, dark eyes, practically vampiric if you’re asking, nice build but not too nice, if you know what I mean. Smells like suntan oil and citrus. And thank God, he’s not wearing Speedos. That’s where I draw the line.

Aside from the fact that he has single-handedly annoyed the ever-loving tranquility out of me, by assuming it’s okay to talk to me like I’m easy to approach or something, at least he’s easy to look at.

I keep a steady glare going, regardless, because unfortunately for him, he annoys me more than he turns me on.

“Private party going on here, pal, so…” I try to shoo him away with one hand while the other scrolls through my playlist to find something beachy and zen-like again.

“I couldn’t help but notice you alone over here. I wanted to—”

There’s nothing wrong with alone.

My vacation intruder chuckles. “I’m alone, too. In fact, that’s why I came over. I was hoping you’d be interested in joining me for—”

“No,” I interrupt, still seething over Mick’s insinuation that I’d drop what I’m doing and head home at his beck and call.

My visitor laughs again. “You don’t even know what I was going to ask.”

I look him over again.

His tan tells me he doesn’t work too many hours in a week. The Rolex on his wrist tells me he has money. Lots of it. And he wants me to know it.

“Trust me. I know where this is going.” I lie back down and close my eyes. “Not interested.”

I feel his shadow over me still, so I know he hasn’t taken the extremely blatant hint I’ve thrown at him. If I lay here long enough without acknowledging him, though, he’ll go away.

The fuck is with this guy?

I prop myself back up onto my elbows and glare.

“I couldn’t help but overhear your call, as well,” he says, as he squats down beside me. “Am I correct in assuming you might be an expert in the field of, finding criminals?”

He whispers the last part as if it’s some sort of taboo word only allowed in certain circles, like Pawn Shop Owners of America, or reality television addicts anonymous.

Strictly speaking, I’m a private investigator, but I take whatever I can get in a man’s world. A lot of times that means side jobs they can’t be bothered with because it doesn’t pay enough. Not that it’s any of this guy’s concern.

When I don’t answer him right away, he adds, “I’ve never met a woman bounty hunter before.”

And fuck if he doesn’t seem amused by the thought.

I roll my eyes and mumble a little. “I don’t have time for this.”

“Seems to me you’ve got all the time in the world,” he shoots back. “I mean, seeing how you’re off duty until further notice?”

I want to slap the smirk right off his face.

Or lick it off. If I wasn’t so agitated with him, that is.

I could easily toss him down into the sand, then crawl up his body like a she-tiger in heat.

I’d use him up then spit him out.

And I’d only bite him a little bit. Swearsies.

I catch myself ogling his chest. I imagine taking one of his taught nipples between my teeth. I can almost hear him scream like a girl when it happens.

Now I’m smirking, too, wondering if it’d be more painful or pleasurable for him.

Regardless…“None of your business. And since you did eavesdrop on my very private convo, then you definitely heard me say I wasn’t interested. Still holds.”

He narrows his eyes, bites his lip.

“What if I told you I’d pay you a ridiculous amount of money to help me out with an extremely difficult and sensitive situation?”

I narrow my eyes. Purse my lips.

I could go either way, to be truthful, but I am on vacation. In the end, I decide to sit up and go back to searching for a good song.

“I’d say you don’t have that kind of money.”

It’s a bluff. I know he has money. But maybe if he thinks I charge too much he’ll get the drift and leave. Me. Alone.

Annnnnd, now I’m curious. Mostly about how much he’s willing to shell out to make this “sensitive” situation go away.

I peek over at him, squinting from the sun. “How ridiculous are we talking?” 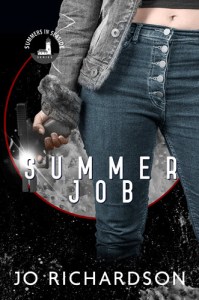 To celebrate the release of SUMMER JOB by Jo Richardson,
we’re giving away a $25 Amazon gift card! 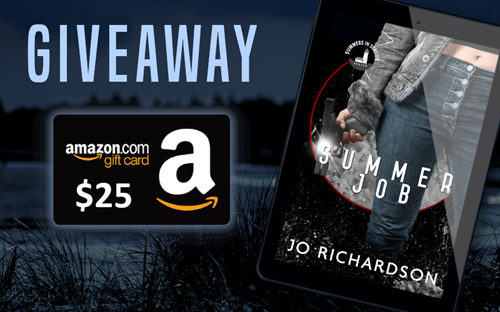 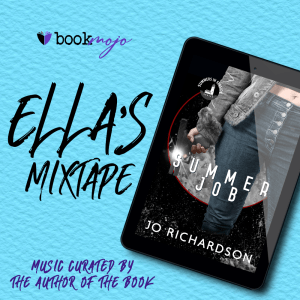 Are you looking for a new way to
experience Summer Job by Jo Richardson?

The author has curated a playlist inspired
by the book and its main character Ella Green. 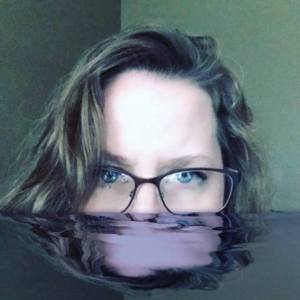 Let’s be honest, it’s not about me, it’s about them *nods to characters*… however,

Life is messy. I like to write about the mess and make something good come out of it. That includes any, and / or all of the above +  everything else that happens along the way.