En route to meeting her alien fiancé for the first time, Julia gets lost inside the lower corridors of the alien starship. When she slams into a grease-spattered alien and he grabs her, she does what any self-respecting Earth girl would do—she stabs him. He flings her over her his shoulder, hauls her to his room, and tosses her onto his bed. Then he kisses her.

No puny Earth female should dare to assault him, yet this one challenges him at every turn. He wants her, and he’s used to taking whatever he wants. When she signals for him to kiss her, what’s a hot-blooded alien to do? He climbs over her and captures her mouth with his own.

An Earth woman and an alien male collide on a starship bound for the planet Crakair. Will the seven foot tall mass of pissed off alien release her or make her his bride?

Sign up for Ava Ross’s newsletter and receive a FREE copy of AXIL,
a novella-length story in the series to give you a taste of her steamy alien world.

Each novel in the Mail Order Brides of Crakair sertes is a complete,
standalone story with a steamy guaranteed happily ever after
with no cheating and no cliffhangers.

AVA ROSS fell for men with unusual features when she first watched Star Wars, where alien creatures have gone mainstream. She lives in New England with her husband (who is sadly not an alien, though he is still cute in his own way), her kids, and assorted pets, including a yorkie pup and three cats.

Nothing beats being locked up forever in supernatural juvie, right?

If only committing murder wasn’t my only way out.

I just wanted to find my father.

When I’m framed by the head of the Seeker’s Guild and sent to Darkwater Reformatory to serve a life sentence, I know I’m doomed. I’ll never see anyone I love again. And forget trying to escape. Darkwater is located in the fae world, on an island in the middle of a forbidding sea. Wizards sent there never return.

Yet my father’s also at the Reformatory, and I’ve been desperate to find him. But he’s using a fake name, so the odds of identifying him are slim. He could be the warden, a guard, or a fellow inmate…

While I track him down, I’ll have to blend in. Seekers are the cops of the fae world, and I was their most promising Seeker. If my identity is revealed, I’m dead. Other than escape, I have two ways out. One, survive the ever-changing, magical catacombs that are the training grounds for a secret Reformatory project. Pass all the tests, and I can leave Darkwater.

Or, I could go with the second option and fulfill the bond I made with the Head Seeker. It shouldn’t be that hard to eliminate a fellow inmate.

Except he’s the wizard I’m falling for.

Wicked Betrayal is Book 1 in the Darkwater Reformatory Series. Follow Tria as she hunts down her father, falls for a hot fae wizard, and saves the world. Or something like that…

KEEP READING TO SEE THE COVER & ENTER THE GIVEAWAY!

END_OF_DOCUMENT_TOKEN_TO_BE_REPLACED

After defeating the nightlace vine eager to kill every outling on campus, I’m feeling kinda cocky. But nothing ever goes smoothly for me, does it?

The good news first. I’ve not only figured out how to ride an aldakor, I’ve convinced the naiad living in the moat I can be trusted. You might say I’ve got an in with magical creatures. And I’ve found a new best friend who’s awesome, even if she’s keeping secrets.

The bad news? Donovan’s bespelled. If I don’t break his curse, we’re doomed. And, in my class, Magical Horticulture of the Night: Adding the D to Deadly, I accidentally freed a beatleycarne, unleashing the deadliest prankster known to the fae world. Need to catch that baby and lock it up fast before the Academy collapses around me.

Seems like I’m fighting one crisis after another. Then someone unexpected emerges from my past. And the person responsible for the nightlace murders? She wasn’t working alone, and the wizard isn’t finished with me yet.

With the beatleycarne wreaking havoc on my life, Donovan bespelled, and someone determined to kill me, I need to harness every strand of power I can find. Because a battle’s coming and only one wizard will emerge the victor.

END_OF_DOCUMENT_TOKEN_TO_BE_REPLACED

The first novel in the Raiden Warriors series by Denna Holm…

When Abby Harris takes her faithful German shepherd out for a hike in Oregon’s beautiful mountains, getting abducted by aliens isn’t even a blip on her radar. Her trusty can of bear spray and pocket knife aren’t much help against the seven-foot monsters who swoop in out of nowhere to transport her to a ship in space.

Nicolai Nekbet is Crown Prince for the House of Nekbet on the planet Raiden. Unable to bear healthy children with females of their own species, Raiden warriors must hunt for a bride outside their own world. Nicolai has his heart set on a human even though their planet is protected by an ancient species called Laizahlian. When he sees the tall blonde-haired beauty out in the mountains with only a dog by her side, he knows he must have her.

With Abby safely on his ship, Nicolai injects her with his shaprata, his essence. His shaprata will change her on a cellular level, making them compatible for procreation, but he must still work hard to win her heart. If she rejects their union, it could easily mean his death.

END_OF_DOCUMENT_TOKEN_TO_BE_REPLACED

Lily: I was thrown into an alien gladiator ring as a prize for the victor.

He’s kind and sweet and beyond appealing. I’m falling fast, but can I capture his heart?

Christophus: My captors think they’ve broken me, forcing me to fight as a gladiator. But I’ll never perform the one act they desire the most…until they throw Lily into the ring, and I instantly know she is My One. Now I’ll do anything to protect her and win her heart.

END_OF_DOCUMENT_TOKEN_TO_BE_REPLACED

A beauty stolen from Earth.

Gifted to an alien Beast.

Can love set them both free?

Amelia: Abducted by aliens and taken to their ship, my best friend and I are desperate to escape and return to Earth. I’m tossed into a cell with a reptilian alien and told I must satisfy him or they’ll hurt my friend. I never thought giving in to his needs might satisfy my own…

Then they put me with a new beast and say we’re going to compete in a deadly game called the Rampage. Alien Hunger Games anyone?

The beast is snarly and ferocious, and he could rip me apart with his tusks and claws. Yet in his eyes, I sense something vulnerable. Lonely. With hints of something I found with the other alien.

I’ll do whatever I can to soothe the beast and convince him to help me win the Rampage. Because losing means death.

That’s all gone now. Hidden beneath this abominable exterior, far more Beast than man. Not only in appearance, either; because the scent and the sight of this female does things to me. Things that surely no man would ever feel.

But maybe that’s just as well–without the fury of the Hunger, neither of us has any chance of surviving the Rampage.

Our alien romance series guarantees hot males, fierce women, steamy, on-the-page romance, and a satisfying happily-ever-after. Each book features new characters and can be read as a standalone though they may be more fun if read in order.

END_OF_DOCUMENT_TOKEN_TO_BE_REPLACED

Maggie Shelbador is a half-breed succubus with a heart. Though raised inside one of the worst whorehouses in the world, all she wants is to find one man who will love her despite what she is. She dreams of one day being free of her nightmarish life but fears no man will ever truly trust her.

The year is 3515 and most of the world has been destroyed by a combination of natural disasters and man’s neglect. The whole human race faces extinction. To survive, the leaders of the day approach demons for help, not understanding the high price they will be forced to pay. Normally bound by the summoner’s magic, the demons know Maggie is the key to giving them free access to Earth.

Daniel is a widower with a young son. He is out hunting one day when his settlement is attacked and his son abducted. He tracks them to House of Pain, not realizing a trap is being set for him. Though tortured, Daniel refuses to break when they try to force him to prostitute himself—until a beautiful blonde woman is brought into the room, her power stripping away his self-control.

END_OF_DOCUMENT_TOKEN_TO_BE_REPLACED 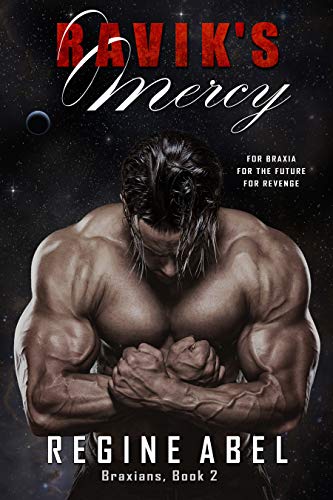 For Braxia. For the future. For revenge.

As the rarest hybrid in the galaxy, Mercy has been forced to hide in plain sight for fear slavers and collectors would hunt her down. Quite ironic, considering her late father had been the greatest slaver of the Guldan Empire. Determined to make amends for some of the wrongs he has done, she goes on a mission to Braxia. But those plans are quickly derailed when she encounters Ravik; a mountain of a man with a fearsome face, and a planet in turmoil.

As the new ruler of Braxia, Ravik is surrounded by enemies. His planet is teetering on the brink of bankruptcy and stuck in ancient, bigoted ways. When an exotic, sassy, and strong female reluctantly accepts his protection during her stay on Braxia, she becomes both his strength and his greatest weakness. As his detractors plot and scheme against him, Ravik fears the horrors of his past will destroy the fragile happiness and glimmer of hope this woman has brought him and his people.

In this brutal, unforgiving world, greed, hatred, and twisted obsessions will clash in a bid for power, for the future, and for revenge.

Warning: this book contains scenes of violence that may not be suitable for sensitive reader.

The Rogue Prince is Book 1 in Royals of Cardenas, a historical romance series set in the fictional kingdom of Cardenas, following the lives of the royal Rothchester family.

Third son of the king of Cardenas, Prince Damien Rothchester is known for his drinking, gambling, and whoring. Knowing he will never inherit the throne, he goes about life feeling purposeless. But when he steps into a glittering ballroom on the night of his twenty-fifth birthday, the roguish young prince’s life will be forever changed.

When Esmeralda Amador steps into the king’s ballroom to perform for the prince’s twenty-fifth birthday, every eye in the room is upon her. One pair of eyes intrigues her most of all … those of Prince Damien, seeming to stare straight through to her soul.

The two know nothing can ever come of their attraction; he is a prince, and she a Gypsy dancer. Yet, neither can seem to resist the passion that sparks when they are together, or the unmistakable call of destiny forcing their lives onto the same path.

However, love is not the only thing destiny has in store …

With a deadly plot against the royal family surrounding him in danger and intrigue, Damien will face a decision he never thought he would have to make. Will he step up to claim a responsibility that should never have fallen to the third son? Or will he abandon it to risk all for love?