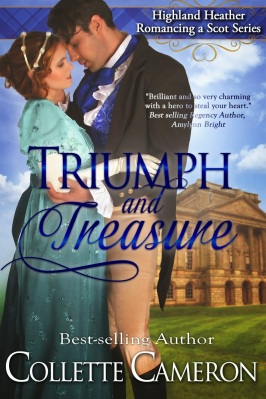 Triumph and Treasure
Highland Heather
Romancing a Scot Series
A disillusioned Scottish gentlewoman.
Angelina Ellsworth once believed in love—before she discovered her husband of mere hours was a slave-trader and already married. To avoid the scandal and disgrace, she escapes to her aunt and uncle’s, the Duke and Duchess of Waterford. When Angelina learns she is with child, she vows she’ll never trust a man again.
A privileged English lord.
Flynn, Earl of Luxmoore, led an enchanted life until his father committed suicide after losing everything to Waterford in a wager. Stripped of all but his title, Flynn is thrust into the role of marquis as well as provider for his disabled sister and invalid mother. Unable to pay his father’s astronomical gambling loss, Flynn must choose between social or financial ruin.
When the duke suggests he’ll forgive the debt if Flynn marries his niece, Flynn accepts the duke’s proposal. Reluctant to wed a stranger, but willing to do anything to protect her babe and escape the clutches of the madman who still pursues her, Angelina agrees to the union. Can Flynn and Angelina find happiness and love in a marriage neither wanted, or is the chasm between them insurmountable?
Amazon Link
Review
This is a quick, romantic read that starts off a little erratic and then evens out to reveal a beautiful story.
I love the main hero, here. He’s intelligent, compassionate, and strong. He’s better tempered than most Scotsmen in the fictitious world during this era, and his love of family enhances his character. I say “main” hero because there’s a few secondary characters that go to bat for our enchanting couple, earning them the title as well.
Although the heroine is naive, she is intelligent. I like the fact that the author makes her easily relatable, as we’ve all had our momentary lapse of reason when we were young. As with the hero, there are a couple of women that could claim the title of heroine in this story.
With That Being Said…
I have to mention that although I enjoyed the story, there were a few times that I felt a little overwhelmed. There is so much unneeded drama! The story turns more than a carousel, and there are several side stories that may play out in the rest of the series, but seem unnecessary in this book. I was a little disappointed and felt there was a lack of focus, which is surprising for such an outstanding author.
On The Other Hand..
In the author’s defense, I haven’t read all of her previous novels. Although this novel is the beginning of a new series, it includes a few couples that are obviously from former stories. However; this does not take away from the current story completely. If anything, it adds intrigue, and makes me want to grab the rest of her writings! I’ve been following her for some time, and I know that her extensive knowledge of the Regency era is extraordinary. This knowledge is one of the reasons I adore her so, and I enjoy the way she utilizes it through her novels.
I recommend this for those who love drama, laughter, love, and heartbreak!
Author Bio: 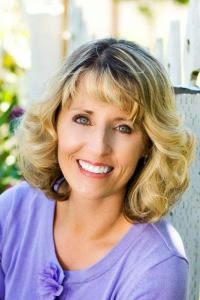 Award winning, Amazon best-selling author historical author, Collette Cameron, has a BS in Liberal Studies and a Master’s in Teaching. Author of the Castle Brides Series and Highland Heather Romancing a Scot Series, Collette writes Regency and Scottish romances and makes her home in the Pacific Northwest with her husband and five dachshunds. Mother to three and a self-proclaimed Cadbury Chocolate chocoholic, Collette loves a good joke, inspirational quotes, flowers, trivia, and all things shabby chic. You’ll always find dogs, birds, quirky—sometimes naughty—humor, and a dash of inspiration in her novels.