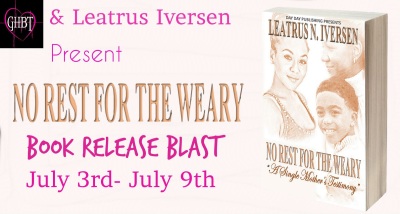 No Rest for the Weary
By- Leatrus Iversen
Genre- Women’s Fiction
Linette Sanderson is a single mother of two wonderful children. She works two jobs to make ends meet and her faith in God keeps her grounded and focused as she strives to make life better for her family.
Linette is faced with a dilemma when her past seems to make its way back into her already hectic and demanding life. She finds herself in a tug of war with her emotions and although she takes it to the Lord in prayer the answers still remain unclear as to how she should handle the situation.

When tragedy strikes her family several times, she finds herself questioning God and her beliefs. She fights with the temptation of giving up on hope and her life. Will Linette be able to remain strong through this tragic time and lean on the Lord for support or will she lose her faith?

Author Leatrus Iversen was born and raised in Virginia Beach, Virginia. She is the single mother of an adult daughter and a teenage son.

Leatrus has been writing since her high school days but never considered publishing her work. In 2015, she made the decision and stuck with it until her debut novel Uncharted Desires was published in 2014. With the same hard work and determination, she is due to release her second novel, No Rest for the Weary; A Single Mother’s Testimony in July 2015.